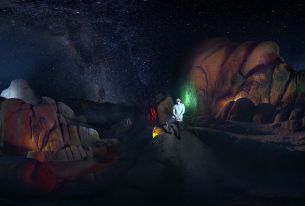 Last week at the YouTube Beach in Cannes, The Mill premiered its latest virtual reality project, “Does Not Exist,” a spatial audio experience created in partnership with Aurelia Soundworks. The immersive piece is performed by beatbox phenomenon Reeps One and composed specifically for mixing in 3D sound, making it the first music video of its kind.

The project pairs The Mill’s visual expertise with Aurelia Soundworks’ pioneering work in spatial audio. The result is a new audience experience that showcases the latest technology for VR and head-tracked 3D sound, a feature recently made available within the YouTube mobile app. By combining these technologies, audiences have the ability to explore an array of sonically and visually stunning locations while immersed in a 360-degree convergence of sound and picture.

Co-Director Gawain Liddiard of The Mill said, “Aurelia came up with the concept of this 360 music video that would not only involve changing environments and hearing how those different environments affect the sonic qualities, but also playing with the concept of where we’re hearing the sounds from. The piece is designed to push those technical aspects, but also experiment with what’s possible in VR.”

Reeps One’s track was composed to fully utilise the 360 sonic and visual space. “The range and flexibility of beatboxing is perfect for exploring the possibilities of sound and performance in VR,” Co-Director John Hendicott of Aurelia Soundworks said. “While the piece is sound-led, I knew the visual component would also be a considerable creative and technical challenge. We set about tackling these problems with The Mill and discussed how certain audio effects could be married visually using a range of techniques. Like all good creative projects, one discipline informed the other and fairly quickly we had developed a framework for Reeps to play within.”

Reeps One added, "Innovation in technology is not only inspiring, but it’s a huge opportunity to do what has never been done before. Writing for this project was like writing in a lucid dream. From that initial stage to ‘That’s a wrap,' the whole team wanted to create a first."

“Does Not Exist” is the newest addition to a broad portfolio of emerging technology projects from The Mill in Los Angeles, including Google Spotlight Stories “HELP,” winner of two Gold Lions in Cannes; and Mill Stitch, recently awarded at the SXSW Interactive Innovation Awards.