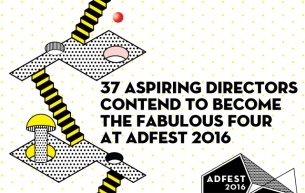 ADFEST is pleased to announce that 37 aspiring Directors from eight cities are in the running to become the ADFEST 2016 ‘Fabulous Four’.

Fabulous Four is a visionary mentoring program run annually by ADFEST, which is designed to nurture up-and-coming Directors.

Every year, ADFEST invites new directors and assistant directors to submit a five-minute short film script inspired by the theme of the festival. This year’s theme is ‘Creative Intelligence’.

Scripts were submitted from Brisbane, Dhaka, Fukuoka, Kuala Lumpur, Mumbai, Shanghai, Sydney and Tokyo with a total of 37 scripts submitted, up from 33 last year.

All 37 scripts will be judged by the Film Craft and New Director jury, which is led by Jury President Sihabutr Xoomsai, Thailand’s award-winning director at Triton Film in Bangkok.

The four directors with the highest score will be named this year’s ‘Fabulous Four’, and they will then have less than one month to direct their scripts in time to premiere at ADFEST 2016, which will take place on 16th – 19th March at the Royal Cliff Hotels Group in Pattaya, Thailand.

Last year, Tomoya Kuge at TYO Camp KAZ in Tokyo won the New Director’s ‘Fabulous Four Commendation’ for his short film, ‘Sweets Gang’. Kuge says: “Compared with before winning this prize, I now have more chances as a candidate for directing TV commercials. Also, my clients are giving me more chances to shoot the way I want to, and I’m expecting to do even more works as a Director this year.”

Vinit Suraphongchai, Chairman of ADFEST, says: “ADFEST is immensely proud of its Fabulous Four program because it is one of our initiatives to help aspiring Directors achieve their goal of directing commercial work. Many previous Fabulous Four Directors are now enjoying successful careers in our industry.”