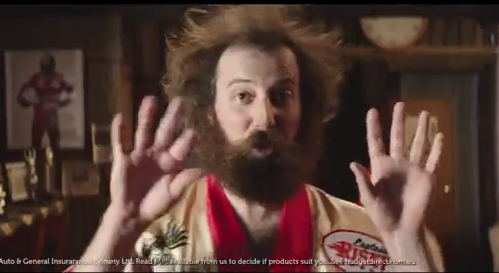 Budget Direct have kicked off 2015 with a new advertising campaign created by 303Lowe.

The campaign introduces Captain Risky, a loveable daredevil character who designs his life around risk and is frustrated because Budget Direct won’t insure him.

The campaign, which launched on January 2, features Captain Risky engaging in the high-risk activities that Budget Direct will not insure. The aim of the campaign is to highlight how Budget Direct can provide Australians with award winning, lower insurance premiums because they are smart about the people they insure.

The campaign is the first new work to be created by 303Lowe, since the full service agency was appointed to the account in August, following a three-way shoot-out against Host and BMF.

Jonathan Kerr, director of marketing & digital for Budget Direct, says: “This is the work that won the pitch. Budget Direct is well known for its market leading prices but we felt the need to help people understand how we can offer award winning insurance at such great prices.  This campaign is designed to do just that, while retaining Budget Direct’s brand personality."

“Budget Direct doesn’t believe lower risk customer’s premiums should subsidise the premiums of higher risk customers.  At Budget Direct you only pay for your own insurance. By saying no to bad drivers, high risk takers and risky circumstances, year after year we are able to offer award winning insurance for less,” he added.

Richard Morgan, ECD of 303Lowe, says: “Captain Risky is a larger than life, adrenalin-loving, anti-hero front man for Budget Direct. Risk is his passion and his reason for being. He embodies all the high-risk activities that Budget Direct will not insure. He badly wants affordable insurance from Budget Direct – but, let’s be honest, he’s never going to get it.”

Nick Cleaver, chief executive officer of 303Lowe, said: “We have collaborated closely with the Budget Direct team on this campaign from early thoughts to final execution; it’s genuinely a team effort and we’re delighted with the result."

The campaign was directed by Hamish Rothwell through GoodOil with effects by Alt VFX.