303Lowe Helps Tab Up their Game 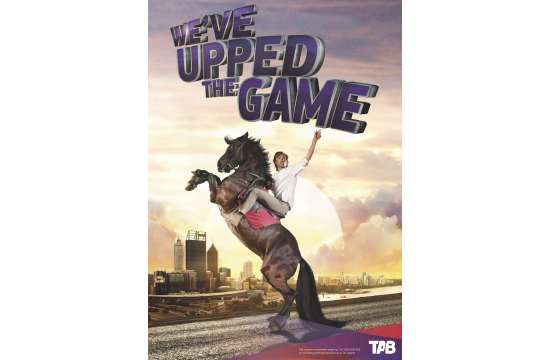 Western Australia’s iconic TAB is upping the game for punters, with significant investment in a consolidated wagering offering, supported by the launch of a major rebrand and marketing campaign, created by 303Lowe.

The campaign, which launched this week with an epic 90-second TVC, celebrates the TAB’s West Australian heritage and draws on local landmarks and sporting locations to reinforce the TAB as the home of racing and sports betting in WA.

The ad introduces an iconic hero on horseback as the voice of the TAB, and a charming and engaging personality for everyone to enjoy.

Richard Berney, Creative Director at 303Lowe, said, “The TAB is steeped in local pride, and is a classic part of our WA urban landscape – our creative drew a modern hero character from all this. He is the best of WA – strong and natural, with a streak of larrikinism. He is both serious and surreal, just like the very best sports and racing moments.”

With significant changes made across the business including its online offering TABtouch, the retail network and competitive product initiatives, the TAB promises a more personalised and rewarding betting experience for its punters, with this new brand campaign.

Derry Simpson, Head of Strategy & Planning at 303Lowe, said, "The TAB is a truly iconic West Australian brand and an institution for its punters. The opportunity to work on such a brand at both a strategic and creative level doesn't come around very often and the journey has been an amazing one.”

“With ever-increasing competition and an ageing customer base, our challenge was to redefine the TAB for a younger punting audience and celebrate the brand's iconic status in Western Australia. It's a new platform and a long term strategy for the TAB, which we will be rolling out over the next few years," said Simpson.

Alister Shennan, General Manager Marketing at the TAB, said, “This campaign redefines who we are as a brand and reinforces our leadership position in the market. It’s the kind of move that only a leader could make and is a sign of our commitment to improving our offering for our loyal punters in WA.”

The rebrand is the first significant update to the brand in 15 years. It includes store signage, all new website and product improvements, in addition to rebrands of TABradio (previously Racing Radio) and TABform newspaper, all of which have rolled out this week.

The rebrand is supported by an integrated advertising campaign, which will run across TV, Press, Digital and Outdoor and also includes tactical activity around the AFL Grand Final and Spring Racing Carnival which will appear in the coming months.