Ceremony set to roll for 2014 after this year's success 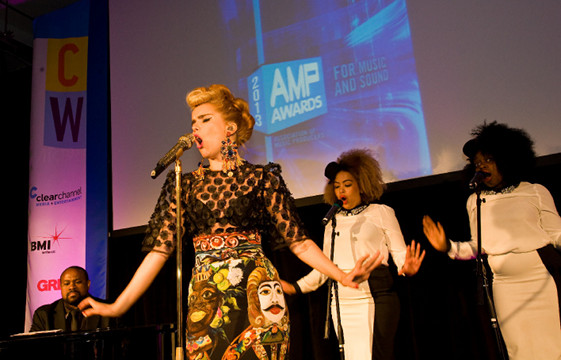 Following the success of the inaugural AMP Awards for Music & Sound earlier this year, the Association of Music Producers has announced plans for the 2014 competition and awards show.  The event is moving to one of New York City’s premier concert and performance venues – City Winery – and will take place on Wednesday, May 7, 2014.

AMP will be posting full details on categories, fees, deadlines and eligibility requirements on its website, www.ampnow.com, early next year. As the only industry forum in the U.S. recognizing excellence in music and sound for advertising and branding, the first AMP Awards drew over 400 professionals from music production, publishing, record label, advertising and media.  AMP’s board has promised to “turn up the volume” in 2014.

Honoring the best-of-the-best in 10 categories, including Best Original Song, Outstanding Adaptation, Best Use of a Licensed Song, Outstanding Sound Design and more, the AMP Awards drew hundreds of entries in its first year.  Several new categories will be added in 2014, which will be announced in January.

In addition, a crucial part of the AMP Awards program has been the creation of the AMP Hall of Fame, honoring legendary brands that have demonstrated a profound understanding of the importance of music in telling their story.  In the Awards’ inaugural year, The Coca Cola Company and McDonald’s took the stage – and trophies – as musical pioneers.  Two more inductees will be honored by AMP at the 2014 Awards.

“We’re excited to be back with the premiere music and awards competition in the world and the only one created by an association of music professionals,” says AMP President Larry Pecorella, Co-Founder and Creative Director of Comma Music.  “The response to the first AMP Awards was overwhelmingly positive, and we’re confident that year two will be even better.”