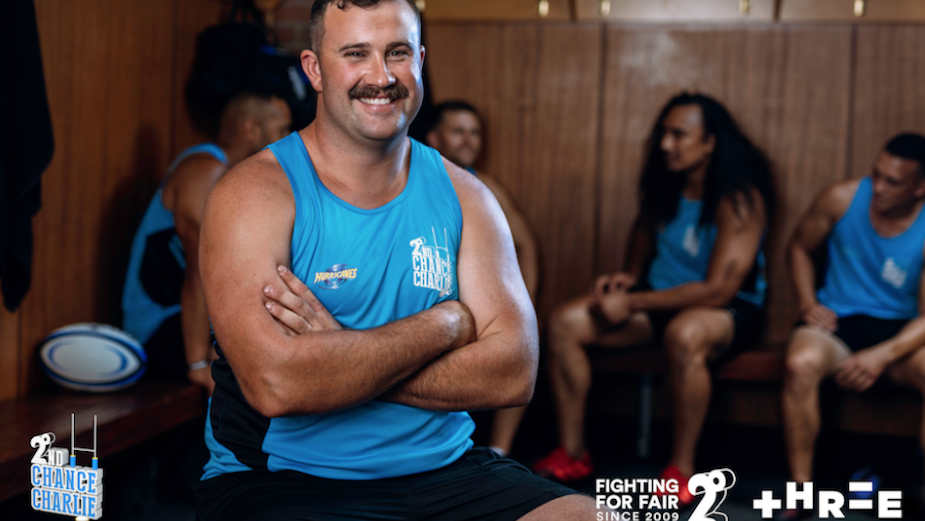 It has been an epic few months for five rugby hopefuls who took part in 2nd Chance Charlie; a reality show devised for 2degrees by TBWA and created in partnership with THREE which offered contenders their second chance at Super Rugby stardom.

All five Charlies put their bodies on the line as they fought to resurrect their dreams of rugby stardom and it has all paid off for winner James Cockburn. The 27-year-old firefighter from Wellington has won an intensive 12-week training and development programme with the Hurricanes, $10,000 and a chance to play rugby at a professional level thanks to 2degrees.

Family man James, who has two kids and a third on the way lost an incredible 10kgs throughout the competition. Rugby has always been his biggest passion but after a couple of selection setbacks he put his rugby dreams on hold to focus on his family. James’ win was announced in an emotional final episode on THREE on Thursday 6th August.

Says Ben Wheeler, chief brand and insights officer for 2degrees: “Kiwis have been cheering our 2nd Chance Charlies on from their armchairs for the last 12 weeks, following their highs and lows and really getting to know them. It’s been a great way to bring our ‘Fighting for Fair’ brand platform and Super Rugby sponsorship to life and we’re really pleased we can give James his second chance.”

While James was selected by a panel of experts to win a second chance, Kiwis were also encouraged to vote for their favourite Charlie to win the 2degrees People’s Choice award and $5,000. On Friday Daniel Kauika was awarded the honour of being the clear public favourite.

Says Shane Bradnick, chief creative officer, TBWA New Zealand: “2nd Chance Charlie has been hugely successful and shows how with the right brand platform and partnerships, a brand can truly become a part of Kiwi culture. It’s been an incredible experience witnessing these five Charlies grow as they endured an intense mental and physical journey, battling to prove they’re the one most deserving of a second chance, and with lockdown this was almost blown again. But with Super Rugby Aotearoa coming back, the lads and the 2nd Chance production team sprang back into action. All the guys did so well and it’s been important for Kiwis to see this other side of the men pursuing rugby greatness in New Zealand. Congratulations to James, he really deserved the win.”

All episodes are available to watch on ThreeNow.