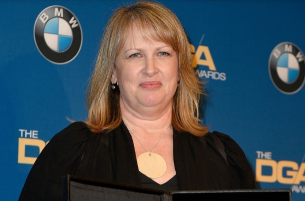 2AM Director Becky Martin scooped the award for Outstanding Directorial Achievement in a Comedy Series for Veep at this years Directors Guild of America Awards, held at the Beverly Hills Hilton in Hollywood on Saturday Night.

In accepting the trophy for Veep, Martin thanked creator Armando Iannucci who brought her to the U.S. from the UK and kickstarted a US career “that has literally changed my life”.

Iannucci, also represented by 2AM for commercials, left the show in 2016 after 4 years at the helm. She also thanked David Mandel, who took over as Executive Producer for this series.

Becky was the only female director represented at this years Directors Guild of America Awards.

For more information please contact: Rikki Percival at 2AM, Rikki@2AM.co.uk