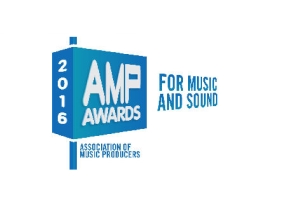 The Association of Music Producers has announced plans to hold the 4th Annual AMP Awards for Music and Sound at City Winery in New York, returning to the site of its sold-out presentations in 2014 and 2015. The 2016 event is set for Wednesday, May 11.

The competition, judged by agency, label, publishing and music production professionals, will award trophies in 11 unique categories, as well as a Best In Show award chosen by its Curatorial Jury. The 2015 Best In Show went to ad agency Leo Burnett for its “Safe in My Hands” animated short promoting Allstate Insurance and its LGBT outreach campaign, featuring a song written by singer-songwriter Eli Lieb.

An official Call for Entries, which signals the opening of the online entry portal for the competition, will be announced in the coming weeks, as will more news and details about the event. To screen last year’s AMP Awards winners, click here.

“We’re thrilled to be back at City Winery with what’s become the advertising music industry’s must-attend event,” says AMP President Marlene Bartos, Executive Producer at Yessian Music in New York. “Our focus on the creative contribution of music and sound is an important acknowledgement of the power and value of our members’ work.”

“The growing involvement and participation of major ad agencies, music publishers, labels and the creative community in the AMP Awards underscores the deep interconnectedness these industries share,” adds Bang Music Founder and Past AMP Board President Lyle Greenfield. “We see our show as a celebratory ‘town hall meeting’ for this diverse community.”

In addition to presenting its signature awards, AMP will also induct another iconic brand into its AMP Hall of Fame at the City Winery event. This honors progressive advertisers for Outstanding Achievement in the Use of Music to Define the Brand and has been presented to marketers whose use of music has been fundamental to building their strong consumer perceptions. Past inductees include Coca-Cola, McDonald’s, Budweiser, Nike, Chevrolet and Pepsi.

As it has each year, the AMP Awards – described as ‘the loudest awards show in the business’ – will feature live performances by up-and-coming artists and groups. Headlining the talent roster for the 2015 event was Island Records singer-songwriter Gin Wigmore. Also performing were the Photo Finish/Republic Records duo Marian Hill, and DJ Prostyle, who appeared courtesy of iHeartMedia.

For more information on the Association of Music Producers, visit www.ampnow.com. Additional news on the 2016 AMP Awards will appear on the site as well as on AMP’s Facebook page.