Awards and Events 187 Add to collection 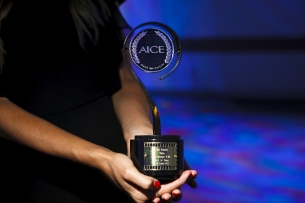 The role of the Curatorial Committee is to ensure that all finalists selected by the judges are appropriate for and meet the criteria of each category. It also selects the Best in Show winner from among the respective category winners. The category finalists and winners are determined from the results of online and live-panel judging sessions currently being conducted in AICE chapters across the country. Once the results are tabulated, the Curatorial Committee reviews the results to confirm that the winners are both eligible and worthy of an AICE Award.

The list of editors on the committee includes Craig Lewandowski of Utopic in Chicago, Chris Franklin of Big Sky Edit in New York and Bob Spector of Beast in San Francisco, all of whom also serve on the AICE Awards Committee. Joining them are Kathryn Hempel of Cutters in Chicago, Terry King of Territory in Detroit, Steve Manz of Relish in Toronto and Tina Mintus of KYLE edit in New York.

Also serving on the committee are Audio Mixers Tom Jucarone of Sound Lounge in New York and Katy Mindeman of Particle in Chicago; Colourists Billy Gabor of Company 3 in Atlanta and Steve Rodriguez of Apache Digital in Los Angeles; and VFX Artists Patrick Murphy of A52 in Los Angeles and Vicky Osborn of MPC in New York.

Tina Mintus, Editor and Owner of KYLE, says she’s honored to serve on the Curatorial Committee: “I’m very much looking forward to it,” she explains. “It’s a great opportunity to get to know some of the other members and hear what they’re thinking. And for me, it’s a way of giving back and being involved. I’m happy to share my time and my insights as an editor."

Mintus, who recently joined the New York Chapter board, adds that her involvement in AICE has already paid dividends: “I’ve learned so much by taking part in our meetings,” she says, “and been able to forge relationships with people I wouldn’t have had a chance to otherwise – really smart editors, artists, producers and business owners. It’s totally been a win/win as far as I’m concerned.”

The 2016 AICE Awards, the association’s 15th annual competition, comprises 23 categories, 17 for editorial and six for post production crafts including audio mixing, colour grading, design, original music, sound design and visual effects. Winners will be announced at the AICE Awards Show on Thursday, May 12, at Navy Pier in Chicago.