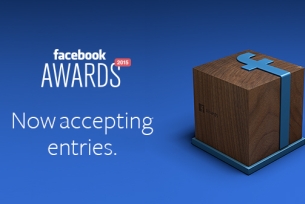 Submissions are now open for the 2015 Facebook Awards, and this year’s competition has some exciting updates for advertisers.

The Facebook Awards (formerly the Facebook Studio Awards) celebrate top creative work on Facebook and, for the first time, on Instagram too. Winning work doesn't just wow audiences, though. It drives businesses results. Brands and agencies that submit their work for review have an opportunity to receive international recognition from the top minds in the industry, including members of the Creative Council, and set the standard for marketing excellence on Facebook and Instagram.

As marketing evolves, so do the Facebook Awards. This year’s Facebook Awards feature four additional categories to recognize more aspects of creative excellence in marketing. Also, work on Instagram will now be considered (under the Craft category).

The new categories include:

- Craft: Recognizes excellence in film, photography, copywriting, user experience and/or sequencing
- Social Technology (new): Recognizes the best technology integration or application built with Facebook
- Media Strategy (new): Recognizes creative and effective use of media on Facebook using insights, data and targeting to inform strategy and drive business results
- Facebook for Good (new):  Recognizes excellence in campaigns created for
- New Frontiers (new): Recognizes excellence in campaigns for high-growth markets, including India, Southeast Asia, Latin America, Africa and the Middle East
The Facebook Awards are open to campaigns that ran between February 1, 2014 and March 31, 2015. Original work can be in any language, but submissions must be in English. To submit your campaign for review and for more details on voting criteria and timing, visit the Facebook Awards website.
view more - Awards and Events