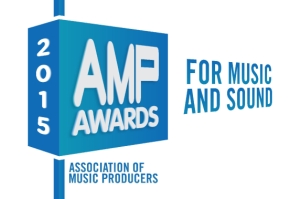 The Association of Music Producers has announced plans to hold the 3rd Annual AMP Awards for Music and Sound at City Winery in New York, returning to the site of 2014’s acclaimed, sold-out show.  The event is set for Wednesday, May 6, 2015.

In just two years the AMP Awards has become the music industry’s signature event honoring outstanding achievement in music and sound for advertising, branding and media.  With 11 unique categories and creation of the AMP Awards Hall of Fame, the event has brought together professionals from the music, advertising, marketing and entertainment worlds to celebrate the best of the best.  Prior inductees into the AMP Awards Hall of Fame have included such pioneering brands as Coca-Cola, McDonald’s, Budweiser and Nike.

“We’re very excited to be bringing the AMP Awards back to City Winery for 2015,” says AMP President Marlene Bartos, Executive Producer at Yessian Music in New York. “As the ad industry’s only competition devoted solely to the creative contribution of music and sound, this is an important acknowledgement of the power and value of our members’ work.  And with our Hall of Fame inductions, we in turn acknowledge the consistent excellence in the use of music and sound that our most progressive marketers have demonstrated in their brand messaging.”

Participating again on the 2015 AMP Awards Advisory Board will be inaugural Board Chair Josh Rabinowitz, EVP/Director of Music, Grey Worldwide and 2014 Chair Rani Vaz, Sr. VP/Director of Music and Radio, BBDO. The Best In Show winner last year went to Chipotle’s “The Scarecrow,” an animated short that featured music supervision by duotone audio group.

Rocking the celebration at the 2014 Awards gala were performances by Island Records artist American Authors and Capital Records artist Sky Ferreira. The 2015 lineup will be announced early in the new year, along with a full list of Advisory Board members and details on the AMP Award Call for Entries.

For now, save the date:  Wednesday, May 6th @ City Winery for the industry’s loudest celebration of music and sound.  For more information on the Association of Music Producers, visit their website here.