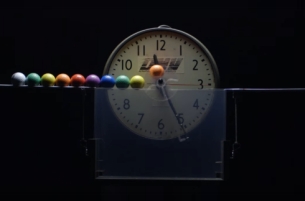 Created specifically for Field Day, the YouTube-sponsored channel curated and produced by 1stAveMachine that’s responsible films like the highly successful “100 Years of Beauty,” Partington’s “Slow-Berg” follows the lackadaisical journey of the director’s golf ball as it strives to reach its hole. The ball is aided by a variety of components that serve as metaphors for all things slow-moving including molasses, a turtle (Partington’s personal favorite) and melting popsicles. The director’s madcap mentality and offbeat sense of humor come to play amidst a display of languid theatricality, all set to the velvety beats of Kanye West’s “Drive Slow.”

Regarding his approach on this latest effort, Partington says, “I have a love-hate relationship with Rube Goldbergs; while they can be super-fun, they can also be super-tedious and confusing— after all, they’re considered exceptional simply by virtue of being needlessly long. That is the jump-off point for the Slow-Berg. I thought it would be fun to flip that concept, make it as slow as possible— so slow, in fact, that some of it could only be watched in time-lapse!”

As is his modus operandi, Partington himself handcrafted each of the elements within Slow-Berg, which he hopes will appeal to a broad audience. “I like to think that this could be engaging to everyone— that’s always my goal anyway. When a Rube Goldberg is successful, it’s because people can understand and be engaged by the action— and then at the end they share a little of that sense of accomplishment.”