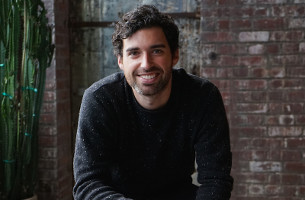 A director who aims to convey beauty in film and engage audiences in a human way, the Brooklyn-based Bliss initially started out in the cutting room at the likes of Whitehouse Post and The Mill before making his move behind the camera, first as a DP then full-fledged filmmaker. “I decided to move into directing to take control of the process, to communicate exactly what was called for rather than piecemealing something that was close to the goal,” says the director, who prefers to “get his hands dirty” and engage with talent and locations directly in each and every project. “I learned to ask the question ‘Why?’, ‘Why is this phone off?’, ‘Why is this car red?’ We have 30 seconds – sometimes less – to communicate something, and we should push ourselves to make every detail sing.”
With a portfolio that canvasses the commercial, music video and film spectrum, Bliss has reinforced his attention to detail and displayed his prowess in eliciting emotions in projects for Vice, Lucky Charms, the band Hooray for Earth, Google, Samsung, Squarespace, Bumble, Sperry, Microsoft, and Chinese beer giant Tsingtao, the last of which he considers an all-time favorite to work on. “It was such a challenge to create something charming and beautiful,” recalls. “It’s not the traditional beer commercial, but it was so rewarding creating a commercial that addressed exactly what beer does: it opens you up to new social experiences, like engaging with new people ‘over a beer.’”
Now as an official part of 1stAveMachine, Bliss hopes to inject his own brand of lifestyle flare to the roster, taking shoots out of the soundstage and into the field and on location. “I’d love to tell stories that feel real and authentic, even when they’re narrative,” adds the director, who signs on to 1stAve on the heels of finishing his new documentary and upcoming Vimeo Staff Pick, Monster Factory. “I want people to connect to the characters and stories we find and create, to give people a reason to smile because of the charm and cheeky realism. I want to create moments that are funny because they’re true, not to simply make people laugh. I always love to push the audience to have a subtle smile because we triggered a feeling or emotion.”
With his multifaceted background and ability to stir audiences throughout his diverse array of creative efforts, Bliss makes for an ideal fit within the 1stAveMachine fold according to Partner Sam Penfield. “We are so excited to have Tucker as a part of the family. As is our model, we spent two years working with Tucker before signing him. It’s important to us to maintain a balance that has to do with the culture of the company. Directors must be humble and hardworking in spirit, collaborative and entrepreneurial in nature and someone you would truly love to go on a roadtrip with. Tucker is all of those things and a truly talented filmmaker to boot.”
view more - Hires, Wins & Business