LA team to be led by Arvind Palep, Serge Patzak, and Sam Penfield 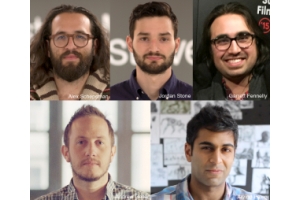 Award-winning mixed media production company 1stAveMachine is excited to announce their new west coast headquarters and expanded content division. The stellar team, led by 1stAveMachine Partners Arvind Palep, Serge Patzak, and Sam Penfield, comprises Executive Producers Andrew Geller and Garrett P. Fennelly, Director of Development Jordan Stone, and Director of Digital Content Alexander Schepsman. All, with the exception of Penfield and Patzak, will be based out of the new Santa Monica office and will focus on film, TV, online, and branded content with special access to servicing clients in the “Silicon Beach” tech sector.

Leading the creative voice is Director Arvind Palep, one of the original co-founders of 1stAveMachine. His work includes both live-action and animation direction, and he is known for creating visuals that blur the line between reality and imagination. Palep has been featured at numerous festivals and showcases, including the Saatchi & Saatchi New Director’s Showcase, and he is currently working on the feature film Prosthesis for Universal.

Executive Producer Andrew Geller joined 1stAveMachine in March of 2011, heading their creative development department, and helping to move the company into long-form entertainment with his work on Prosthesis. He has since executive produced 1stAveMachine’s first television series “ThingamaBob”on History Channel 2, the upcoming comedy feature After Finding Sofia, directed by Nico Casavecchia and starring Sam Huntington, and their first graphic novel, “The Golden Goose,” created by Director Asif Mian along with many other projects currently in development.

Executive Producer Garrett P. Fennelly began his career as the unit production manager on films such as New York Export: Opus Jazz and Martha Marcy May Marlene (official selection Sundance 2011 Winner of the Best Director award, Official Selection at Cannes). He then produced award-winning Andrew Renzi-directed short films such as The Fort (Sundance 2012), Teacher of the Year (Tribeca Film Festival 2012), and KARAOKE! (Sundance 2013), and recent features including Blumenthal (Santa Barbara 2013) directed by Seth Fisher, All That I Am (SXSW 2013) directed by Carlos Puga, and his latest feature project, Bluebird (Tribeca 2013), directed by Lance Edmunds. His commercial clients include Starbucks, The New York Times, NatGeo, Sephora, Porsche, and Mercedes. In the music video world, he recently executive produced OK Go’s VMA-winning “The Writing’s on the Wall” directed by Aaron Duffy and Bob Partington together with the band’s lead singer, Damian Kulash.

Director of Development Jordan Stone started at 1stAveMachine from the ground up. After graduating from Northwestern University with a BA in Radio, Television and Film, he joined the company in February 2013 and quickly went on to serve as their head of creative development, helping to secure new business for their commercial arm. He also currently serves as a creative director on a high profile, yet-to-be-announced online effort for a major tech brand.

“We’re excited about starting our Santa Monica office,” said Palep. “It’s the perfect place to leverage the talent and creative goodwill we’ve built over the year in film, TV, digital and branded content.”