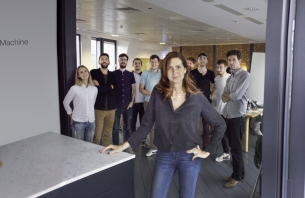 Award-winning mixed media production company 1stAveMachine has established its European footprint, opening the doors to a dedicated London office that houses its own set of UK-based directors and talent. Leading the new London operation is Managing Director/Executive Producer Isabella Parish, an animation/live producer who spent well over a decade at global production company, Partizan.

Even though 1stAveMachine is opening up shop in Europe, the company is no stranger to European collaborations. As partner Serge Patzak noted, “The UK, and Europe in general, has been a really important marketplace. 1stAve’s foundation was built on creative work with the likes of Mother London and 180 Amsterdam for brands such as Diageo and Adidas’s “Modular Man” for the 2006 World Cup, respectively. We hit the ground running with campaigns like Audi’s “Unboxed,” one of 1stAve’s earliest UK campaigns.”

As for 1stAveMachine London’s newly minted MD/EP Parish, said that the production company and partners Sam Penfield and Patzak have been on her radar for quite a while. “I have always kept a close eye over what’s been going at 1stAveMachine,” she half-jokingly admitted. “When we met, immediately, it just felt right. Sam and Serge approached me with the idea, I loved it, and was excited to take up the challenge.”

During her lengthy stay at Partizan, Isabella set up the production company’s animation arm, Partizan Lab, and served as head of animation. She’s worked with a veritable who’s who of directors and studios in the process, including Michel Gondry, Doug Nichol, Michael Gracey, Antoine Bardou-Jacquet and Matthias Hoene. Along the way, Parish and Partizan’s directorial roster collaborated with brands like Evian, Samsung, Kellogg’s, Nokia, Coca-Cola, eBay and Starbucks, picking up awards at D&AD, Cannes and BTAA.

In her new role at 1stAveMachine, Parish will oversee a growing roster of directors at the company’s London operation, which according to partner Patzak is more than just a branch. “We have a permanent home in an amazing space in Soho and it is really important for 1stAveMachine London to have its own independent culture.”