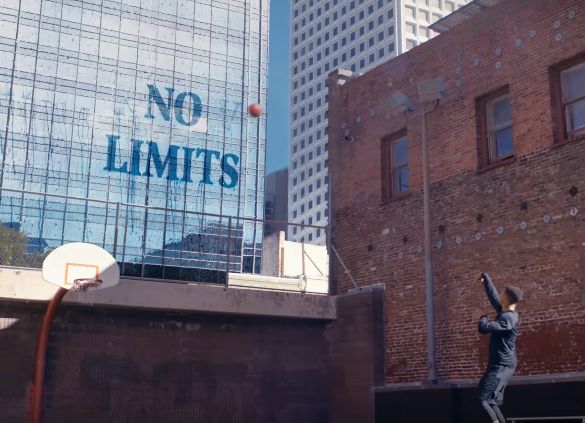 Production company 1stAveMachine and a pair of its directors, Tim Brown and Roman Rütten, join forces with agency McGarryBowen in a new campaign for water filtration brand, Brita.

The two-spot Brita campaign launched with the aptly titled “Wash Away,” an inspiring ad in which the negative messages life can throw at us – like “Some Dreams are too big” – are literally washed away and transformed into uplifting ones like “Dream big.” According to Rütten , the message filtration in “Wash Away” symbolises the important role Brita plays in our world. “The concept shows how Brita is filtering out negative things from the water through metaphors shown in our daily lives,’ the director explains. “It’s how we filter out the negativity and outside noise that tell us we can not achieve something. The focus instead is on our path empowered by the essence of life, in this case Brita-filtered water.”

Veering sharply from the hoops and motivational themes of “Wash Away,” 1stAveMachine’s co-directors turn their lens onto the brand’s product line itself with the second campaign spot, “Unison”. To emphasise the speed of the Brita Stream line, Brown and Rütten designed a mechanical structure out of Brita pitchers to create a water sculpture that forms a mesmerising visual display to convey the brand message that “Faster is better.” “The agency chose to make one film that is much more product focused,” Brown explains. “So, the challenge here was to create an extremely complex product demonstration that drew parallels to kinetic art installation.”

Despite the differences between the two Brita spots, the overall campaign serves as just the latest example of the 1stAve filmmakers’ versatile, innovative directing styles, which are reflected in work like Brown’s ambitious collaboration with Bob Partington for Stella Artois and Rütten’s new visually poetic film, “Gone”, that he shot in Tulum and was recently selected and featured as a Nowness pick.