Trends and Insight 481 Add to collection 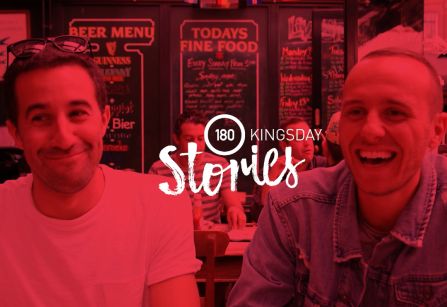 What a weekend - a memorable incident-packed FIFA World Cup final brings to an end a month of 64 exciting football matches played out by 32 teams from across the globe. As we reflect back on the highlights, the memories and the dodgy decisions, it also brings to a close our activity for Qatar Airways and their FIFA World Cup sponsorship. Here's some of the team reflecting on this massive undertaking.

The best, hardest, most fun, most difficult, most ball bouncing-ly exhausting yet scissor-kick-into-the-top-corner, scream-down-the-camera brilliant thing you can do in our business is work on a FIFA World Cup campaign.

We’ve done quite a few of them down the years here at 180 and each one has its own quirks, challenges, ups and downs.

Our recent Qatar Airways campaign for this year’s tournament was no different.

Our motto was simple - stick together.

Our ambition - our campaign should have more fun than anyone else.

Our reality - prepare for anything.

Qatar Airways are a tough client. They are ambitious, strong minded and want it all done yesterday. Actually, that’s like a lot of clients. Anyway, they were also FIFA’s newest official sponsor, anxious to make a splash as a precursor to 2022 and hosting the tournament in Doha. The important thing to remember is that Qatar Airways can’t do ‘we get football’. They don’t have years of equity in the game - nor are they integral to performance like those brands with swooshes or three stripes. But they are global and as an airline they can legitimately say they know what it means when we come together. And the World Cup brings us all together like nothing else. Together in hope, joy, nerves, anxiety, defiance. For a few weeks every four years, the world sings the same tune.

Cue the famous '60s hit ‘Dancing in the Street’ and ex-Pussycat Doll Nicole Scherzinger to belt out a toe-tapping bubble-gum pop remake.

Then take that soundtrack and create a film and campaign around it that is as joyful and fun as possible. Working with the brilliant people at Traktor and Rattling Stick we built a story incorporating some top tekkers, dancing mascots, hundreds of extras, night shoots, singing fish, 4am call times and handstands.

‘We need to discuss’ the client said. Everyone left for five minutes. Prepare for anything.

We came back in. All good. Very happy except... we need the goldfish to hold the note longer on his lyric.

‘I think we can live with that.’

Just three weeks later - after lots more late nights - editing, grading, finessing the CGI details and hours of studio time creating toolkits - tweak, amend, tweak, revise and tweak again - we had a global campaign to ship. On time. And pretty much on budget.

Anyone who does one of these learns a lot.

How to move at lightning speed while making sure you don’t drop a thing.

How important it is to stay focused on the creative heart of the project - ours being make it fun, make it joyful.

You come to learn how critical it is that you trust each other. Everyone’s got enough to do - so you have to step back and let others do their jobs. But make sure you do yours.

Somewhat annoyingly you also learn there’s a very decent living to be made as a pop star’s hair and make up advisor.

And most importantly you learn how to prepare for anything.

Because there’s always something….and as we had a few beers to celebrate the end of the project, watching the opening match and our perimeter boards gleaming on TV screens around the world, the phone rang. Just one more tweak to those perimeter boards...