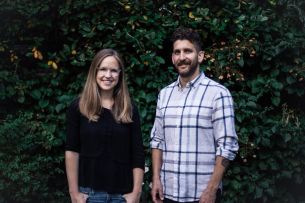 On the back of a strong period of growth and a raft of new hires, 180 Amsterdam has today announced two senior promotions.

Tony Bartolucci and Hannah Smit have both been promoted to Creative Director, forming a new creative partnership to lead the Benetton and ASICS accounts.

Tony joined 180 Amsterdam in 2013, and has since been involved with a number of high profile campaigns on global accounts such as Asics and PlayStation. His unique approach to conceptualising inspired design creative has produced highly lauded work, including ASICS’ critically acclaimed One With The City campaign.  Prior to moving across the Atlantic, Tony worked as an Associate Creative Director at DDB, where his work for the New York Lottery was partially credited with the agency's creative resurgence, and helped them to be named as ‘2013’s Agency to Watch’ by Advertising Age.

Hannah’s promotion comes just nine months after joining 180 Amsterdam, where she has played a pivotal role in the rebranding of Benetton, spearheading the integrated Clothes for Humans campaign which included film, print and in-store assets, product design, website redesign, a new voice and an in-store overhaul. Hannah, a highly awarded creative, previously worked in Australia and Canada, latterly as Associate Creative Director at John St in Toronto. While there she worked on some of Canada’s biggest brands including President’s Choice, ING Bank, Shoppers Drug Mart and Winners (TJX).

Tony Bartolucci, Creative Director, 180 Amsterdam, commented: “Joining forces with Hannah to lead the work on Benetton is an incredible prospect. There is a real challenge here for us, as the brand is very much at the threshold of a crucial new era. There is a strong brand heritage which has featured some legendary creative directors and design studios; I’m excited to be part of the team now taking it to the next level.”

Hannah Smit, Creative Director, 180 Amsterdam, added: “Our ambition is to really put the clothes at the core of Benetton’s identity, so conceptually it remains powerful but with purpose. We also have some big work in the pipeline with Asics, along with some really interesting new business prospects, so it’s awesome to be part of 180 Amsterdam growing as an agency.”

Al Moseley, President and Chief Creative Officer, 180 Amsterdam, commented: “This is a very exciting period for 180 Amsterdam.  We are delivering brand-transforming work for global businesses, so to have two extremely talented creative directors in Tony and Hannah working in partnership is a real boost. Between Tony’s skill for sophisticated design and Hannah’s pragmatic conceptualisation there is a really potent mix of skills and experience, so we look forward to seeing their combined force on future projects.”