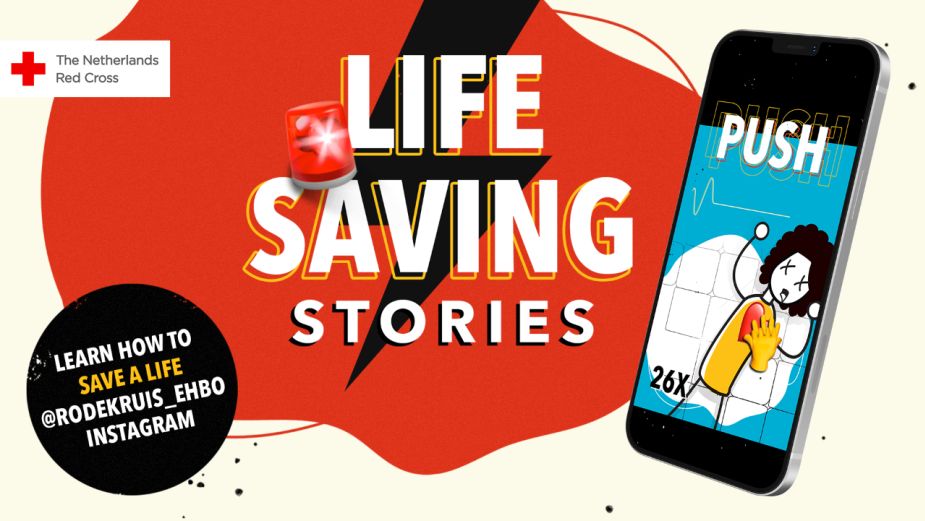 Today the Dutch Red Cross, Het Nederlandse Rode Kruis, is launching 'Life Saving Stories', an innovative piece of CPR training on Instagram. The campaign was conceived, developed and produced in-house by 180 Amsterdam, in collaboration with the Red Cross.

The game consists of 35 animated Instagram Stories in which someone is resuscitated after a cardiac arrest based on the rhythm the person taps through the slides. By continuing to tap to the next story, the character stays alive. Click here to check it out.

With 'Life Saving Stories', 180 Amsterdam has, quite literally, tapped into the behaviour of young people on social media and converted it into life-saving actions. By gamifying the serious training, it appeals to the attention of this target group and closes the gap between education and action.

The social campaign is designed as both an educational tool and also a way to give bystanders the confidence to act, and act quickly.

In the Netherlands, about 300 people each week have a cardiac arrest outside hospital. Research shows that bystanders, and frequently the younger generation, often don't know what to do, with five in six unable to perform CPR or use an AED, a device that can restore the heart rhythm. If both are used, the chance of survival increases by up to 50% if action is taken within six minutes.

After the collapse of a football player during a EURO game this weekend, after which he received life-saving CPR on the pitch, the Red Cross saw a tenfold increase in the number of visitors to its website with people looking to sign up to its CPR training courses.

Kalle Hellzen, chief creative officer at 180 Amsterdam explained: “The social media behavior of young people is often seen as negative. ‘Go and do something useful’, is what people often hear. With Life Saving Stories we do exactly that and turn the 'tapping behaviour' in Instagram Stories into a recognizable tool with which they can save the lives of, potentially older people, in the future.”

Eline Nijhof, head of first aid at the Red Cross said: “We are very enthusiastic about 'Life Saving Stories'. It is nice to offer a serious topic such as CPR to young people on the platform they already sit on every day. In this way we lower the threshold for learning CPR skills. Then the step to putting what they’ve learnt into practice follows automatically. This move also fits very well with our strategy to teach more young people first aid and CPR skills."

Instead of using a traditional CPR track such as the Bee Gees’ ‘Stayin’ Alive’, which has been used to teach CPR for decades because of the rhythm, MassiveMusic created a new bespoke piece of accompanying music to appeal to the next generation of first aiders.

Auke Riemersma, senior music producer at international creative music agency MassiveMusic added: “Since timing is key when it comes to CPR, we thought, why not put the ideal tempo for CPR (104 BPM) into music for this wonderful new Red Cross initiative? The Bee Gees' ‘Stayin' Alive’ has been used for this purpose for years and that's great, both tempo and lyrics, but we thought it was time for something new. Especially because the Red Cross wanted to appeal to a somewhat younger target group, the new music and the appropriate rhythm fit better and hopefully it will save a lot of lives.”