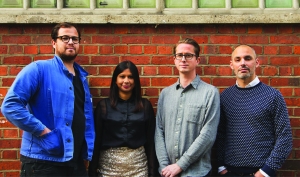 Creative agency 18 Feet & Rising has new faces at its top table: Rob Ward is made Strategy Partner and is promoted to the board, and Anna Carpen moves up to Creative Director. The moves reward the success of recent campaigns and client wins.

Ward, who has been Head of Planning at the agency since 2011, will help run the agency alongside founding partners Jonathan Trimble, CEO, and Matt Keon, Executive Creative Director.

He has been instrumental in helping to deliver a string of new business wins, including House of Fraser, Nando’s Grocery and digital for ŠKODA.

He has led the development of ‘People before Money’ and ‘On Your Side’ for Nationwide, as part of the agency’s campaign to position the building society’s customer-centric and ethical values. He was also strategic lead on the ‘Cheer it Up’ campaign for Cuprinol, the success of which resulted in a Silver IPA Effectiveness Award this year.

Alongside Rob’s appointment, Anna Carpen has been promoted to Creative Director. She joined the agency shortly after it launched, and has since been behind ‘Carousel’ for Nationwide, ’50 Things’ for National Trust and Nando’s first cinema campaign ‘Wing Roulette’.

Jonathan Trimble, says “Since joining the agency, Rob has championed the idea that strategy and creative should work in tandem. The promotion of Anna to Creative Director is a testament to how integral she has been to our creative output, and her contribution to our culture of nurturing young talent.”

Rob Ward, adds “At 18 Feet & Rising, we want to give our clients the confidence to solve their business problems in ways they weren’t expecting - brave, category-defying creativity that get results. ”