15 Seconds to Show Off Your Creativity 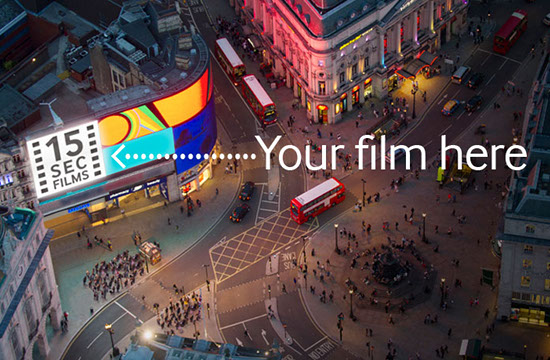 Samsung is lending its outdoor screen at Piccadilly Circus to the best creative talent in the UK as part of an out-of-home, digital campaign called ‘15 second films’ – designed to support and showcase young talent.

The activity, developed by Cheil UK, sees the brand challenge 16-34 year-old budding filmmakers and social addicts to create 15 seconds of original film with the chance to see their work aired in front of thousands of passers-by.

To take part, consumers simply have to upload their film to Instagram with the hashtag #15secfilms by 21st November, with successful clips airing on Piccadilly Circus’ Samsung outdoor screen between the 20th and 21st  November.

Five of the most talented filmmakers will be selected to have their film screened at a VIP Premier event in Piccadilly with champagne reception on 22nd November, as well as receiving a Samsung Galaxy S4 Zoom. One film clip will be picked from five categories; Funniest, Factual, Most surprising, Animated and Most brilliant.

All information is available via a dedicated microsite; samsung-online.co.uk/facebook/15secmovies/.

Stephen Taylor, European brand VP, said: “The clue is in the campaign title; ‘15 second films’ – we’re giving young creatively-minded individuals exactly 15 seconds to show what they can do. It is another demonstration of Samsung’s promise to identify and support young talent in the UK, helping them to flourish by providing them with a high profile and very public-facing platform to showcase their amazing work and natural flair.”

Matt Pye, COO at Cheil UK said: “This is the first time we’ve used Instagram in an out-of-home campaign for Samsung, and is another example of the brand’s commitment to always thinking outside of the box. ‘15 second films’ is a great example of using crowdsourcing for a means beyond simply promoting a brand. Who knows where 15 seconds of film could take some of these budding filmmakers.”