Teams from 14 cities to participate in workshop hosted by Hakuhodo 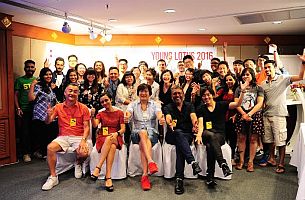 The theme of this year’s workshop is: ‘You can leap higher than you think’, and over the next two days, mentors from Hakuhodo will share their knowledge with the 14 Young Lotus teams, helping them refine their creative process to come up with truly innovative ideas. At Hakuhodo, this process is called ‘Creative Alchemy’, a magical method to come up with unexpected and brilliant solutions.

The most challenging component of the Young Lotus Workshop is when the 14 teams receive a 'brief' from Hakuhodo, with just 24 hours to complete the challenge. The Young Lotus teams with the top ideas will then present them live on stage during the session: ‘Hakuhodo presents Young Lotus 2016: You can leap higher than you think’, which takes place this Saturday March 19th at 11:30am.

ADFEST’s Young Lotus Workshop is recognised as one of the most valuable mentoring opportunities for young creatives in the region.

Takayuki Niizawa participated in the Young Lotus Workshop in 2007, representing Japan. This year, he returns to ADFEST as a member on the Interactive Lotus and Mobile Lotus Jury. Over the past nine years, his career has flourished and he is now Creative Director at TBWA\HAKUHODO, Tokyo.

“Young Lotus changed my life. Literally. I was part of Young Lotus 2007, when the team from Hakuhodo managed to win the Grand Prix. However, what changed my life was not the winning, but the people I met. I had no foreign experience before then. I was born in Japan, graduated from a Japanese university and had been working at a Japanese agency for eight years straight at the time.

“To me, the other Young Lotuses from 14 countries spoke a language I could not understand. It was not just the English that I barely understood at the time, but the things that they talked about. What the heck was TBWA? Omnicom? WPP? Who was Droga? Everyone seemed to be working in a One-Global-Ad-World but me.

“After coming back from the Young Lotus competition, I started studying English harder than ever in my life. At the same time, I moved from Hakuhodo to TBWA\HAKUHODO, and then asked to work at TBWA\Chiat\Day in California. After coming back from Chiat\Day, I asked to work for Apple, which required a creative team to work in Los Angeles. Now, I’m a creative director at TBWA\HAKUHODO. The shock that hit me in 2007 shaped my career and my attitude toward creativity.”

Jimmy Lam, President of ADFEST, says: “We’d like to wish this year’s Young Louts teams the best of luck. Being selected to participate in the Young Lotus Workshop is an opportunity that could change your career path forever. So work hard, but have fun – we’re looking forward to seeing the ideas you create in a few days’ time.”

The 2016 Young Lotus Workshop takes place as part of ADFEST 2016, a four-day festival of creativity at the Royal Cliff Hotels Group in Pattaya, Thailand, which runs from 16th to 19th March.