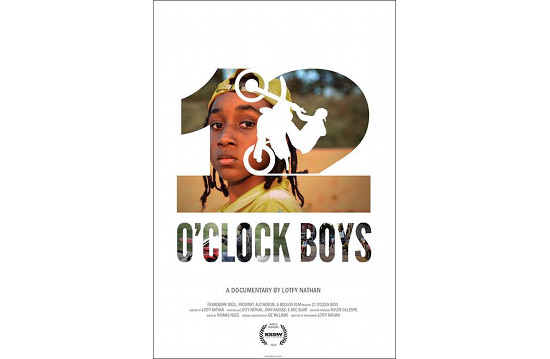 The story of the 12 O’clock Boys – named so for the 90-degree angle biker’s aim for with wheels pointed skyward – opens in theaters, on VOD and digital across North America today.

Stink director Lotfy Nathan spent three years filming over 300 hours of footage of Baltimore’s dirt-bikers, ultimately framing his story through the eyes of Pug, a kid aspiring to gain acceptance within the subculture biking group.

What makes 12 O’clock Boys so effective is Nathan’s ability to stay remarkably true to the sounds and context of the Baltimore streets. His close proximity to the dirt-bike culture reveals a messy place where dust accumulates and people die for no good reason, where crime often pays and true love doesn’t conquer much. Yet it’s in this space that Pug operates, a boy with a power we want and a hint of moral complexity we need.

12 O’clock Boys works as a piece of shared culture, a society in the periphery in a dangerous, off limits land. Hypnotizing slow motion imagery plugs us deeper into the ride, captured via Phantom HD Gold outfitted with an 18-50mm T3 Red lens, a set of Standard Zeiss Primes T2.1 and an Angénieux 25-250mm HR T3.5.

Late-Beastie Boy Adam Yauch’s Oscilloscope Laboratories is distributing the film and, on the eve of the film’s release, Oscilloscope have thrown together entertaining GoPro footage of the 12 O’clock Boys in action, creating an impromptu music video for "Bad Bitches Drop it Low" by Mighty Mark, a Baltimore music producer recognized for his unique hybridization of house, hip-hop and pure, sweet sampling.

Reviews of 12 O’clock Boys have been positive thus far. Slant’s Kenji Fujishima explains, “throughout its brisk 75 minutes, 12 O’clock Boys constantly divides itself between fulfilling the conventions of the informational talking-heads documentary and aiming for a more poetically impressionistic quality.”

Fushima goes on to note how the film is, “edited with a jittery, impulsive rhythm that faintly suggests Terrence Malick – a stylistic connection strengthened by Nathan's occasional reliance on Pug's voiceover narration on the soundtrack, his barely articulate drawl at times recalling Linda Manz's narration in “Days of Heaven.”

Keith Uhlich of Time Out is moved by the story, explaining that, “there’s bleakness in the beauty: What begins as a personal coming-of-age story ends as a tragic tale of a community’s stunted adolescence.” Rolling Stone’s Elisabeth Garber-Paul is also impressed, ultimately drawn to character – especially Pug, “a pint-sized protagonist whose idolizing gaze ultimately dictated the mood of the film.” Paul Rosenfeld over at The Atlantic concurs, hypnotized by learning of, “a controversial subculture seen through the eyes of a young boy.”

Mekado Murphy at The New York Times takes a different slant, examining the mechanics behind making the doc, revealing Nathan’s raw, upfront and gritty experiences in Baltimore: “Dealing with the police, I had to be really adaptive,” says Nathan. “One day, I would play a naïve college kid who didn’t know any better. The next day, maybe I would say I was with HBO documentary films.”

GQ is also captivated, revealing the film to be, “a mesmerizing inside look at a world we’ve never before seen.” Richard Brody at The New Yorker rounds out the top reviews, spellbound by story and visuals. “In slow-motion shots, Nathan captures the riders’ pride in mastery and thrill in adventure,” says Brody.

In addition to opening nationally in the US, the Maryland Institute College of Art (Nathan's alma mater) will be hosting a homecoming screening of the film in Baltimore at the Brown Center's Falvey Hall tonight, with Nathan and several other guests in attendance. If you are in the zone, check it out.