What Beefy Miracle is Hiding in this Holy Cow's Anus? 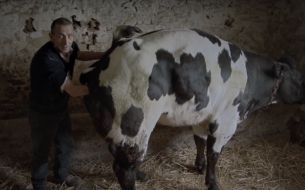 Today sees the launch of “The Bicky Beef Miracle” the new campaign from Belgian burger brand Bicky. The bold film tells the surreal story of a miraculous bovine who excretes tasty, 100 per cent Angus burgers, to the delight of a host of Belgian villagers and one enterprising priest.

This is the latest campaign conceived by creative agency mortierbrigade for the challenger brand, known for its ‘good / bad taste’ tone of voice and non-traditional approach to advertising. The brand currently occupies the third place in the QSR market in Belgium, after high profile international rivals, and has dramatically increased its tone of voice among a target audience of advertising savvy millennials, through smart use of social media, such as Facebook and SnapChat.

This bizarre film was created in collaboration with award-winning director duo Lionel Goldstein (Czar), who are equally known for their love of the bizarre – and sometimes unsavoury.

Jens Mortier, Founder and Creative Director, mortierbrigade, comments: "The freedom that cult brand Bicky Burger gives us fits our agency’s vision and strategy as perfectly as a Bicky burger fits inside a cow’s posterior. However, we’re not creating these attention-grabbing campaigns solely as gimmicks or for a quick laugh; the incredible results of our work with Bicky so far shows that we are really striking a note with burger lovers.”

Sipke van der Werf, Director Marketing & Innovation, Bicky Burger adds: “Bicky can be anything, except virtuous. We save the good taste for our 100 per cent Angus burgers. When it comes to our brand communications, we want to create content that act as an adrenaline shot to the heart of our customers. Mortierbrigade is exactly the right partner to help us to tell stories that don’t smell like advertising and, instead, become part of the cultural conversation. This collaboration with Lionel Goldstein fits our brand perfectly well.”

Mortierbrigade has worked with Bicky Burger for 3 years now and brings its extensive pop culture expertise to bear on creating meaningful communications targeted at students, predominantly aged 18 to 25. The Belgian agency has a strong belief in the ‘Power of Œ!?’ [roughly pronounced ohhhh] which means an urge to question everything. Because mortierbrigade always starts from a position of doubt and a hunger to ask the right questions, it helps brands to position themselves in a way that stands out from a sea of meaningless messages.