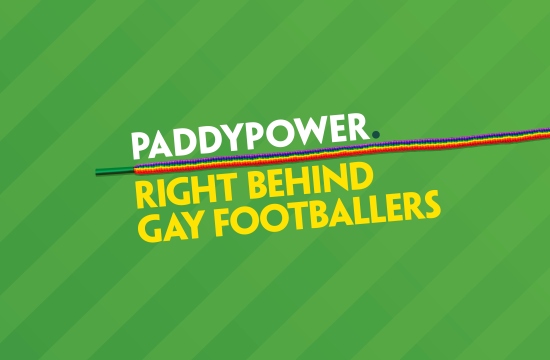 It’s 2013 and sadly homophobia in football is still rife. Paddy Power is never one for shirking the big, thorny subjects that the powers that be sweep under the carpet. So what better way to support gay footballers than giving real players the chance to let their boots do the talking with a pair of rainbow laces. A pair has been sent to every player in Britain, in the hope that the laces will become a truly iconic and symbol of change in the modern game.

There are over 5,000 professional footballers across England, Scotland and Wales but none of them are openly gay – it is widely recognised that gay footballers are too worried about the impact on their careers and personal lives to ‘come out’ rather than there being no gay footballers, a scenario that has odds of over a quadragintillion to one!

The campaign is a result of collaboration between Paddy Power, Stonewall, media agency M2M, and creative agencies CP+B and Lucky Generals.

The idea of asking all professional British footballers to wear Rainbow Laces in support of gay footballers was originated by CP+B and the communications campaign comes from Lucky Generals.

Christian Woolfenden, Paddy Power's Marketing Director said "This is an incredibly important initiative for both Paddy Power and Stonewall, and I am delighted to have been able to harness the strategic and creative talents of two of the best creative agencies in London, to make a difference and get something done about the homophobia that exists in British football".

Ben Walker, ECD at CP+B, said “It’s a touchy subject but this is an unmistakeably Paddy Power way of getting it right out there. I watched QPR on Saturday and Joey Barton was already donning the laces. He’s my new hero.”

The Rainbow Laces initiative is set to last a week, culminating in the Manchester Derby this weekend. No revenue will be sought or derived for this campaign, which has been conceived and developed purely to highlight the issue and spark a debate.