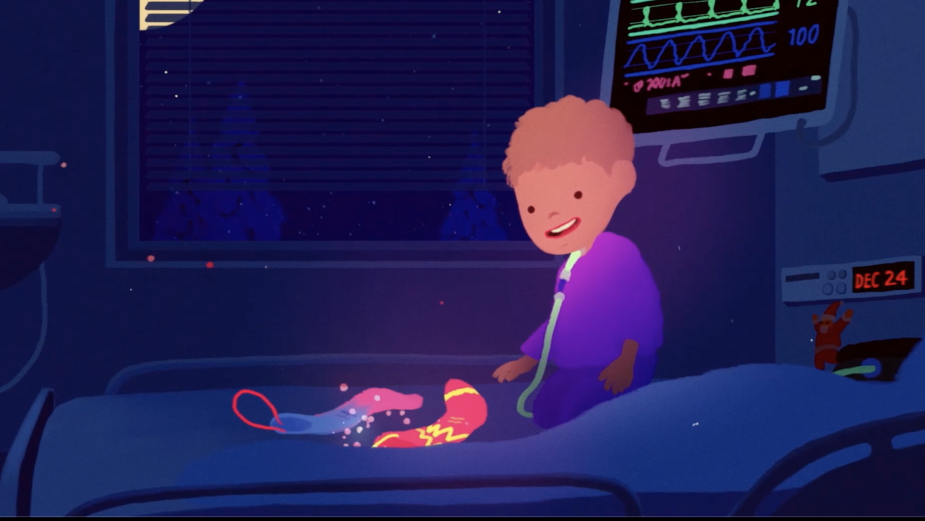 GOSH Charity raises money to support GOSH’s urgent needs, including research into pioneering new treatments, cutting-edge medical equipment, support services for children and their families, and the essential rebuilding and refurbishment of the hospital. Money raised from the Christmas campaign will also help bring Christmas to the hospital for children across the UK whose treatment needs to continue over the festive season, making it a home from home.

The campaign includes a 60-second ad which shows how donations to the charity help bring seriously ill children one step closer to leaving the hospital and spending Christmas at home.

In the animated film, a real-life GOSH patient called Henry, who has spent two previous Christmases at the hospital, collects stocking donations that magically help him to grow taller as he travels back to his home in Yorkshire. Henry receives specialist care at GOSH for a rare cardiac condition and has a tracheostomy and ventilation tube, which has been depicted in the film.

Liz Tait, GOSH Charity’s director of fundraising, said: “Christmas is such a crucial time for us at GOSH Charity and we’re so grateful to our incredible donors for their generosity and support at this special time of year. We’re so excited to launch our 2021 Christmas Appeal which depicts Henry’s journey home, helped along the way by magical stockings that represent donations. All the money raised from this year’s appeal will help support seriously ill children, like Henry, from across the UK, so we’d like to say a huge thank you to everyone involved.”

Set to the music track ‘Home to you (this Christmas)’, donated by Norwegian pop star Sigrid, Henry gathers more stockings on his journey, which he puts on to become taller and taller, eventually towering above Big Ben. Henry finally reaches home where he sleeps in his own bed, waking up to find his mum and dad standing at his bedroom door carrying his baby brother, George, and a pile of presents. The ad closes with the end line: “This Christmas, your donation can bring a child one step closer to home.”

The film builds on last year’s acclaimed campaign for GOSH Charity, which featured a real-life patient called Mia making her own journey home from GOSH at Christmas.

This year’s film was created by directing duo Tjoff Koong and produced by Strange Beast. The campaign launches on November 18th and will be supported by digital media and DOOH.

Charlotte Wolfenden, managing partner at adam&eveDDB said: “It’s been incredibly humbling to work with GOSH Charity on their Christmas appeal this year and to bring to life the magical story of Henry’s journey home. We really hope it encourages people to support GOSH Charity this Christmas, so that other children like Henry can celebrate Christmas at home with their families’’.

The media buying campaign developed by Hearts & Science for the animation includes digital OOH in both large formats and rail D6 screens, as well as video/static ads across a range of social platforms including Facebook and Snapchat.

Garrett O’Reilly, MD of Hearts & Science, said: “This is the second Christmas where we’ve supported GOSH Charity and helped it drive awareness for its fundraising to help get children home for the festive season. It’s always remarkable to be able to use the power of media to spread the message in such a heart-warming way.

“Working with adam&eveDDB has been seamless and collaborative throughout as we have a strong ongoing relationship. We always enjoy seeing the team's great creative work and enabling it to be seen more widely.”

GOSH Charity is also partnering with Hamleys, the finest toy shop in the world, to create a giant Christmas tree installation in their Regent Street store. Launched on 14th November, the tree is dressed in the theme of the campaign and based on the ad. Completing the installation is a model of Henry on top of the tree, built by acclaimed model maker Andy Gent, best known for his work on Wes Anderson’s Isle of Dogs.